Our trip started at 4:30am on a Wednesday morning. We drove the snowy roads in Rochester to the airport. We flew through the cold morning to Boston and left our luggage at a hotel while we went out to spend the day in the city with our cousin Bob. 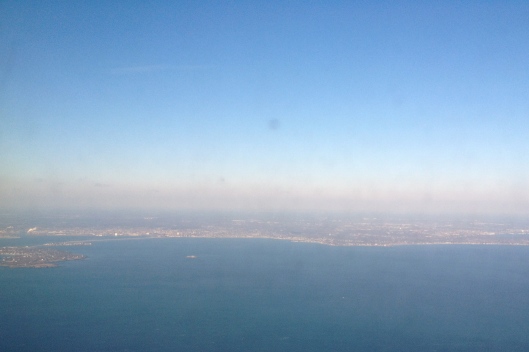 Our flight to France was overnight and we had about 8 hours to kill. It was freezing in Boston so we hurried to a pub for lunch and then to a cafe for some espresso. After visiting a hidden bread shop down a tiny alley in the North End, we returned to the airport to catch our next flight to London. 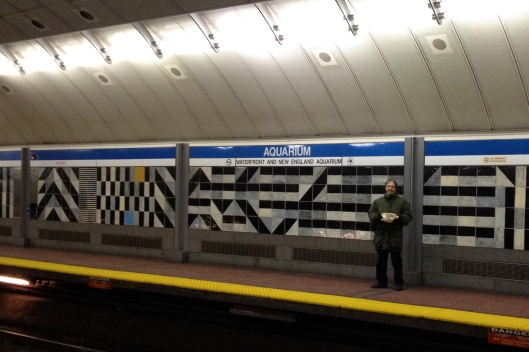 (Bob with his loaf of bread getting on the inbound T)

We arrived in London after a LONG flight over the atlantic. Tired, hungry, and a bit cranky, we waited in forever long lines to go through customs and security in order to get to the gate for our flight to Paris. There was a Starbucks right next to our gate. Thank goodness! I got a Flat White. (it is similar to a macchiato) I sipped the deliciousness and watched the people walking by in the busy Heathrow airport. It was decked out for Christmas and resembles more of a busy shopping mall than an airport. High end stores line the corridors and kiosks and restaurants fill all the other spaces. We were not there too long before they started boarding the plane headed to Paris, France! I was so excited! From the air we could see the London Eye and all the other beautiful buildings on its skyline. Off to France!

(Mom in the Paris airport)

When we arrived in Paris, we waited so long for our luggage, and customs, and then waited for the other Boston Heroes to join our group. Lenni, a tour guide, met us at the airport and informed us that we would have a six hour bus ride to take us to the boat. SIX HOURS! Oh man. We knew we would have a bit of a bus ride, but had no idea it would be that long. One girl was sitting on the floor of the airport crying. Oh boy! It was a long bus ride and we stopped at a rest stop for lunch. My first meal in France was a cup of plain yogurt purchased at a rest stop. Awesome.

When we finally arrived in Macon it was 7pm France time Thursday evening. Which would make it 1pm Thursday our time and thus make our total travel time 39 hours. We were EXHAUSTED! How exciting that once we got on the boat Kim, Colton, Peter, Rebekah & Rebeka’s parents Tim & Tina were already on the boat! They had been on different flights so it was so good to see them! It was cold and foggy and the river looked so erie. The trees looked like pale ghosts lining the edge of the cool grey water. 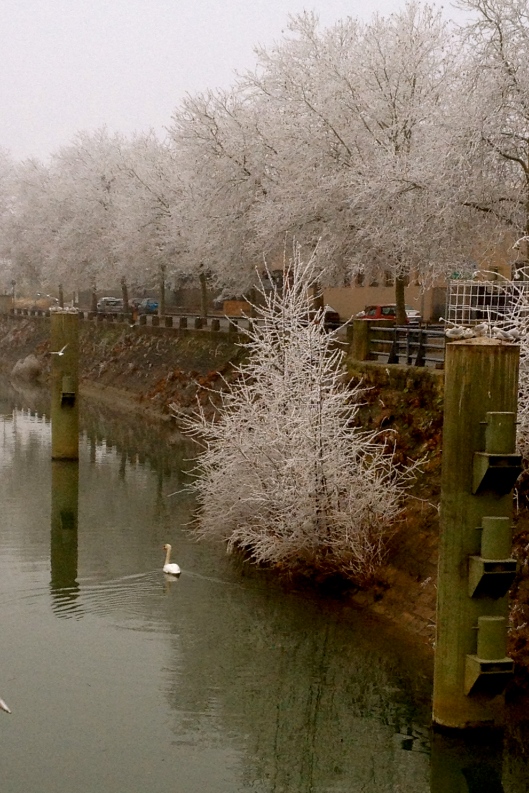 Frost clung to the tree branches creating a beautiful white display. I’ve never seen anything like the frost in France. I think it must be because of the dense fog. So much moisture in the air creates heavy frost on all the branches. So beautiful!

After a quick exploration of the ship we sat down to a delicious four course meal in the ships elegant dining room. I don’t remember much about it. I was exhausted. They served delicious French wine and impeccable service. The waiters/waitresses would soon become friends that we would joke around with and enjoy seeing at every meal. Dinner was always a two hour affair. So European. So delicious. So relaxing. And what a perfect end to two days of traveling chaos. Off to bed. Floating on the Saone.